The Chancel is the richest part of the church, and is an extraordinarily magnificent piece of architecture for a parish church.

It has been extensively restored; the east wall above the arcade was almost entirely rebuilt, replacing a large Gothic window, which had been inserted in the thirteenth century.

The ‘new’ Norman style windows above the altar contain Victorian stained glass of 1880-1,depicting the Annunciation (upper left), Christ the King (upper right) and (lowewindows) six roundels illustrating the Creed, from ‘Born of the Virgin Mary’ to ‘Ascended into Heaven’. High up in the walls to the north and south are small windows with Victorian glass depicting St Etheldreda and St Hugh with his pet swan. Various clues were followed and it is probable that the reconstruction was accurate.

Remains of the old vault, which had fallen down, were discovered. George Atkinson wrote; “On removing the plaster from the wall above the vaulting piers … the curves of vaulting could be distinctly traced … On taking out portions (of the wall) it was found that the ashlar-like stones were no other than arch stones of the old groining, with their mouldings turned inwards towards the wall … We found not less than 40 so perfect that they have been placed in the restored vaulting.”

The dry-wall character of the infilling is an original idea of Pearson’s.

In the chancel floor are two unusual memorials, that on the south side having a very early (perhaps c.l300) inscription in English which probably reads “Alle men that ben in lyf prai for Emme was Fuk wyf” (Fulk’s wife). Part of this inscription is carved mirror fashion. On the north pier of the chancel arch is a brass memorial to Richard Burgh of Stow Hall (d.1616). It also commemorates his son, Sir John, “a noble and valyeant souldyer” killed while serving as colonel-General of Charles I’s expeditionary force to the Isle of Rhe in 1627.

Low down on the opposite pier, a rough scratching of an oared sailing ship can just be distinguished. The earliest known representation of a Viking ship in England, it probably dates from the tenth or early eleventh century, and may be the work of a Scandinavian trader or marauder who had sailed up the nearby Trent. 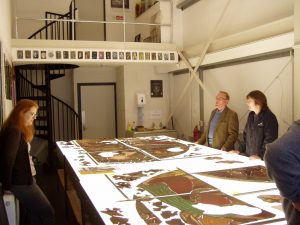 This is a new organisation which is being created to keep people informed of the building work and to support, utilise and develop the Anglo-Saxon Minster Church of St Mary, Stow. Membership of the Friends is by annual subscription/ donation, to receive a 6 monthly newsletter. Click here to find out more… 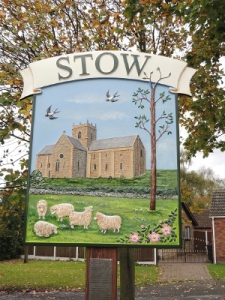